Mineral springs have been around since the Roman times. They drank it and bathed in it and realised it had special properties. In the Daylesford and Hepburn Springs region it was first used by indigenous Australians who also knew it was ‘special healing water’.

Captain Hepburn was one of the first European persons to discover the mineral water in the 1830s and he had several springs on his property. The first he discovered he named the ‘Pavilion Spring’ which is now in the Hepburn Mineral Springs Reserve with several other springs, just a short walk from the Hepburn Bathhouse and Spa. He founded the nearby towns of Smeaton and Hepburn (which was named after him).

In the mid 1850s gold was discovered, making the area hugely popular for gold mining and the chance to become rich and also for the ‘super powers’ that the mineral spring water contained. The mining had the benefit that it uncovered many new springs, but was affecting the flow of some of the springs so the locals banded together and made sure the ‘springs’ were protected, therefore some mines were closed.

In the late 1800s people travelled long distances to drink and also bathe in the spring water. The original Hepburn Bathhouse was built with two baths and was so busy they soon had four baths. The word spread like ‘wild fire’ that the mineral water could cure almost anything, especially skin conditions.

The ‘Pavilion’ was built in the early 1900s near the Bathhouse and it was used as a swimming pool in summer when it was filled with the mineral water and many people could bath or sit around the edge and soak their feet. When it got cooler the water was drained away and the huge room became a social hall for dances and concerts. 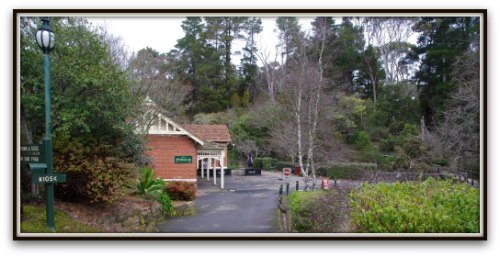 The ‘Pavillion’ was disused for a long time but has since been reopened as a cafe, called the ‘Pavilion Cafe’. The only major repair to be done was replacing the stain glass windows as close as they could to the original glass from studying old photographs.

We recently had lunch in the ‘Pavilion Cafe’ (which was excellent). The building is very interesting from the inside and the outside. It is so full of history, if it could talk I would love to hear the stories – I also tried to imagine what it would have been like one hundred years ago…….so different!

It is about one hundred and eighty years since Captain Hepburn first discovered the ‘springs’ and they are still there for anyone to drink and bottle when ever they like. The most popular and easy ones to access have taps and have been decorated for visitors with information signs, paving and stone walls.

The Hepburn Bathhouse has come along way since the original timber building with a few baths built in the late 1800s. Since then the bathhouse has been renovated in the 1920s, 1980s, 1990s and the most recent ‘state of the art’ renovation in 2008 that cost many millions. It is now called the ‘Hepburn Bathhouse and Spa‘, a visit will have you relaxed, pampered and rejuvenated in an amazing bush setting.

In Daylesford the easiest to access ‘springs’ are near Lake Daylesford. They are the ‘Wombat Flat Spring’ on the King Street side and four ‘springs’ called the Central Springs A, B & C (pictured below), Hard Hills, Wagga Spring, Sutton Spring at Central Springs Reserve which is accessed via Fulcher Street.

The beautiful Central Springs Reserve next to Lake Daylesford

The Google map below shows some of the ‘springs’ in the Daylesford and Hepburn Springs Area.

Return to Top of this Page Mineral Springs